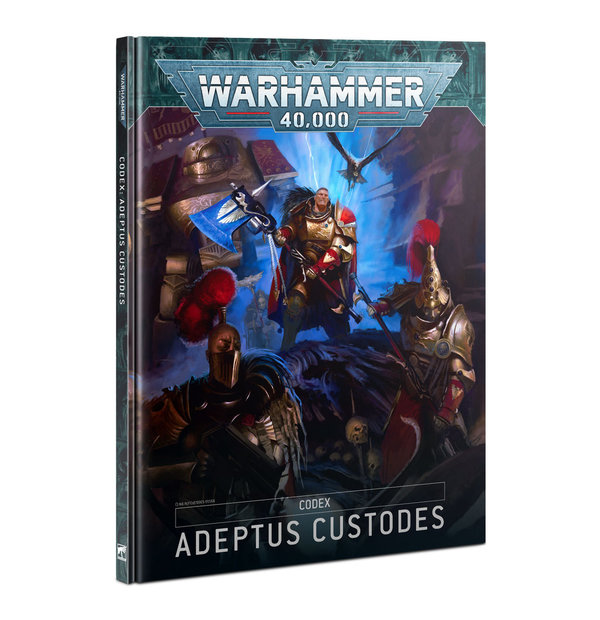 The Adeptus Custodes, more commonly known as Custodians are the guardians of the Imperial Palace and the Golden Throne. More than this they are the personal bodyguard to the Emperor himself. Each Custodian is a unique work of art, the product of genetic lore collected over many lifetimes, making their physical build and martial prowess vastly superior to that of a standard Space Marine. Created using far more advanced gene-craft than that used for the Adeptus Astartes it is whispered that the Custodian's genetic template was forged from the Emperor's flesh as the Adeptus Astartes' was from that of the Primarchs. It is the Adeptus Custodes that decide not only who may enter the throne room of the Emperor but when they may enter. Such is their authority in this matter that Space Marines and Inquisitors must kneel before them.

Generally, the Custodes are larger and much more powerful than Space Marines. Their armour is a finely wrought form of Power Armour, greater than that of even Astartes models, made with Auramite rather than Ceramite. Some Custodes further protect themselves by carrying a Praesidium Shield, Storm Shield or equipping themselves with Terminator Armour. For armament, the Custodes are renowned for carrying Guardian Spears, mighty power weapons that have been carried by the Adeptus Custodes since long before the Emperor's confinement. This weapon is closely associated with the Custodes and is depicted on their banners and badges. Other weapons carried by Custodes include Sentinel Blades, Power Knives, and Custodes Vexilla.

As befitting of their role as the Emperor's guards, the Custodes were given access to the finest and most advanced technologies of the Imperium. This is often reflected in their vehicle designs, most of which are Anti-grav. The Custodian Guard is known to have used Grav-Rhinos, Caladius, Pallas, and Coronus Grav-Tanks, and Paragon Pattern Jetbikes. In the ten thousand years since the Heresy the Custodes have meticulously maintained and preserved much of their equipment. However few of their technologically advanced vehicles remain and they rarely use post-heresy designs.

This definitive Codex for all Adeptus Custodes collectors.